Kyneton has become host to myriad of colours and textures this week for the Kyneton Anzac week quilt exhibition – With You With Me With Them.
The week-long exhibition honours those who have served our country by their military service. Together with a host of partnering organisations, the event organisers have created an extensive and colourful collection that will warm the hearts of all.
The exhibition was warmly opened by David Peterson, a 31-year-old veteran, who spoke about the hope he was given when he received his quilt at a particularly dark period in his life.
The quilt became the changing point in his life. The knowledge that someone cared enough to send him a box with a quilt and two letters touched him so much that he changed his mind about taking his own life. Today he is working with beyondblue, with the hope that he can help other veterans to stay strong and not take their own life.
“Our exhibition seeks to highlight the hardships commonly experienced by servicemen and women when returning to civilian life, including PTSD, unemployment, depression and isolation. All too often the sacrifice continues for the rest of their life,” event organiser Ros Matheson said.
The collection on display does not stop at quilts but also includes military artwork by Sydney-based artist Caroline McGregor. Each quilt on display has a different story to tell and are exquisitely made by a variety of quilters such as renowned quilter, Rachael Daisy and even a debut for a local quilter.
Quilts of Valour Australia were awarded to local veterans Robert Renton and Russell McGregor on opening night. Rob Renton, who is an avid Collingwood supporter, received a black and white quilt. Russell McGregor received an autumnal toned quilt to reflect his extensive interest in gardening.
“It is amazing what the event organisers have put together. As a veteran, I was extremely touched by the thoughtfulness and effort put into this event. Who would’ve thought that veterans and quilts would come together so beautifully. It was a joy to know that Rob Renton received a quilt,” said Andrea, a local veteran.
With You With Me With Them is on exhibition in the Watts Pavilion at the Kyneton Showgrounds until Sunday April 29 (10am-4pm daily). Entry is $5 with all profits from the event donated to the partnering organisations who provide support services to modern and past veterans. 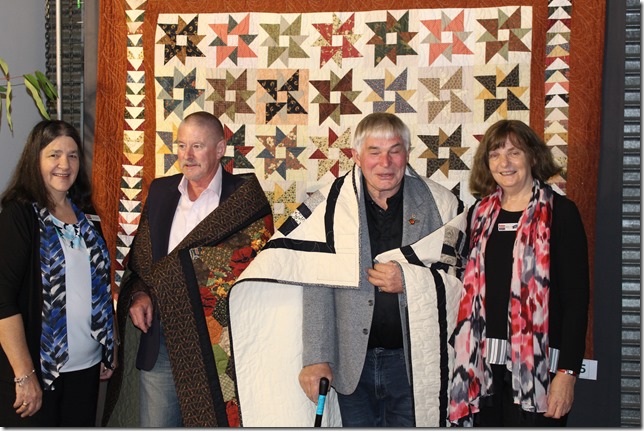