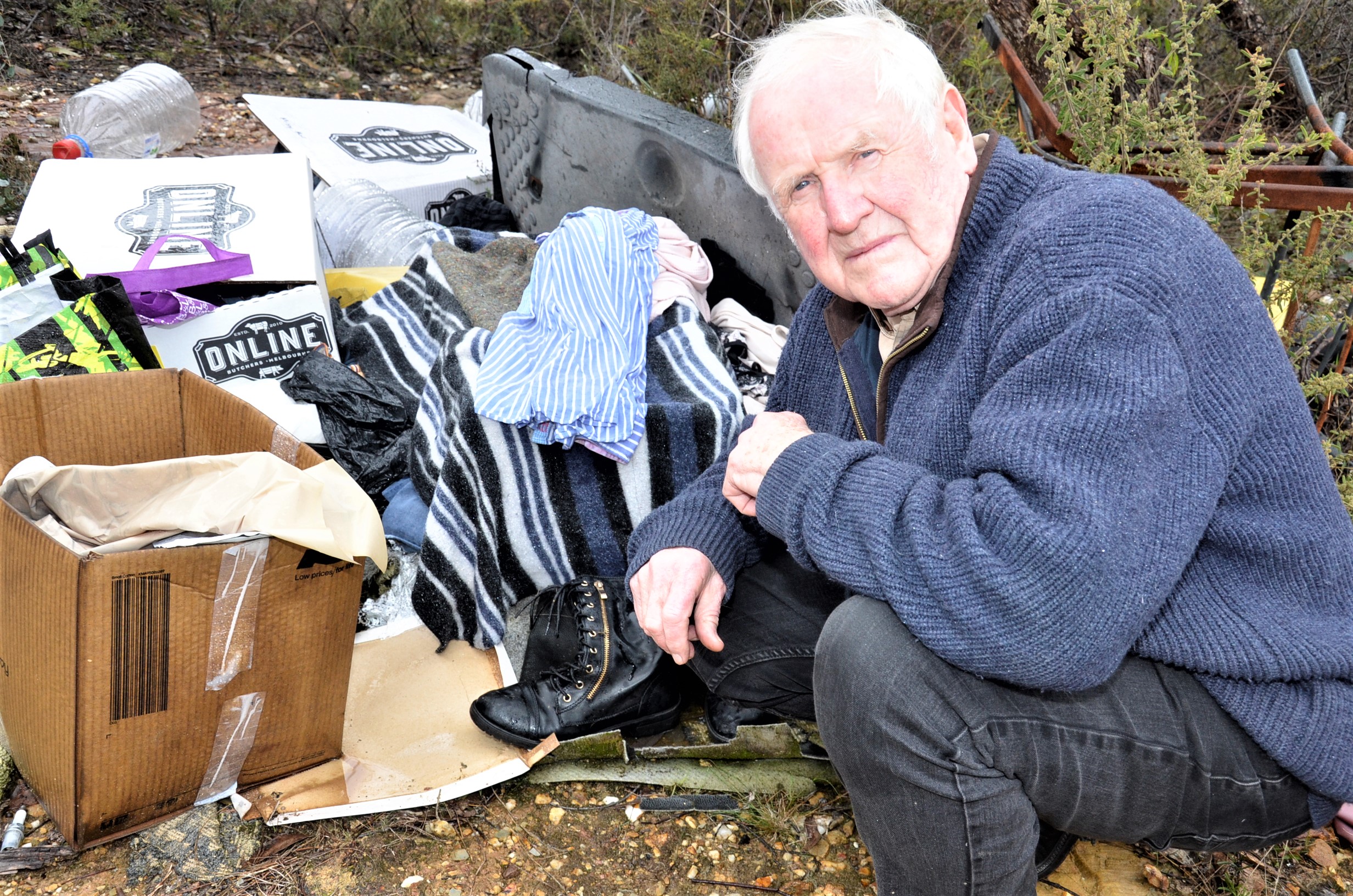 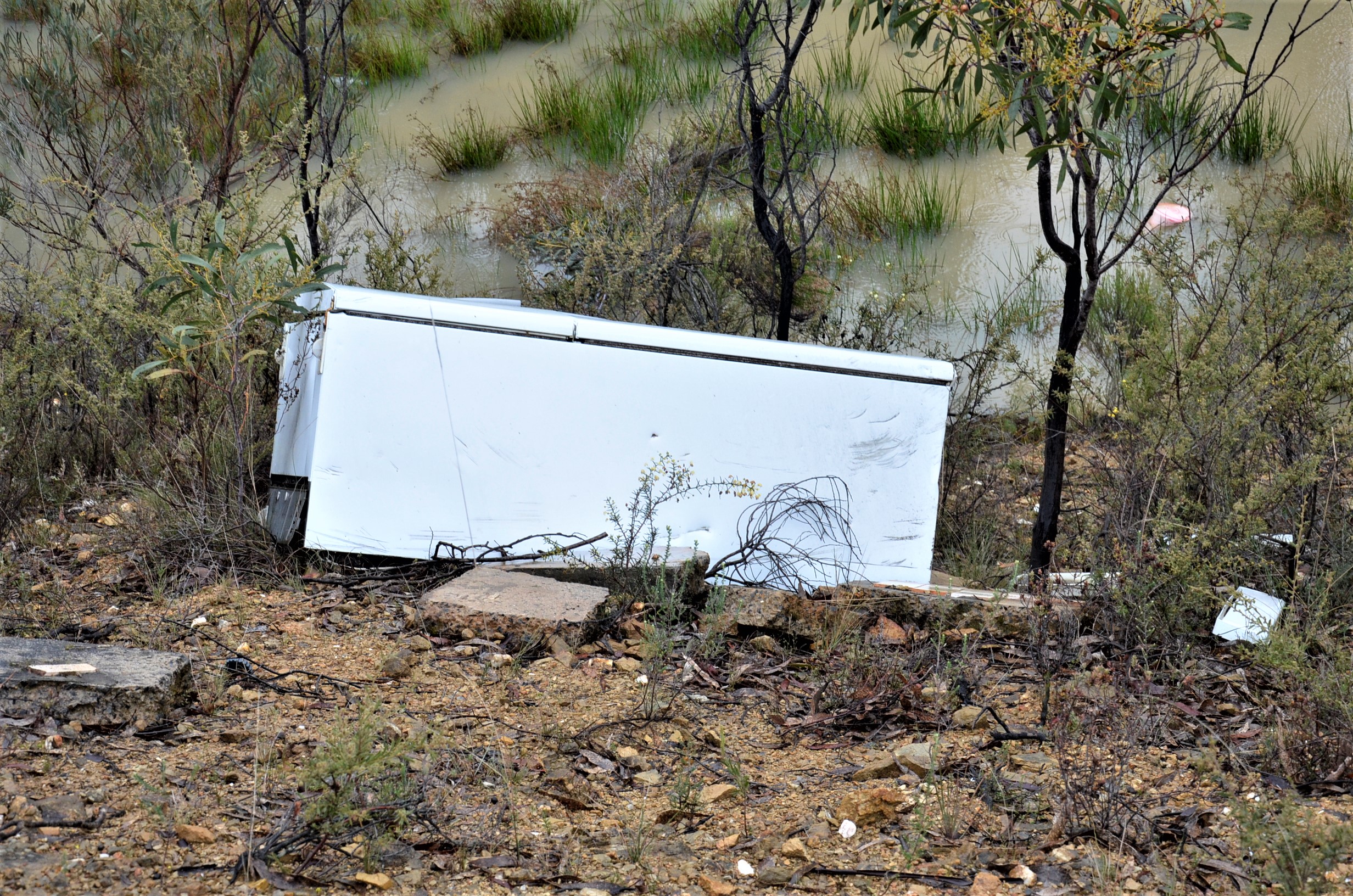 Chewton residents are outraged after a significant quantity of rubbish was discovered illegally dumped in bushland in the Castlemaine Diggings National Heritage Park.

Among locals demanding action to clean up, and better police, the unsightly practice, Chewton’s John Ellis said the mess was discovered in bushland off Morgan Track.
“It just makes me bloody angry,” Mr Ellis said.
“I have reported it to Parks and to the EPA.
“It was discovered here in recent days. It’s a mixture of household rubbish and the same name and address appears on at least three different items.”

About 20 metres away from the newly discarded trash, a refrigerator also lay dumped, desecrating the natural bushland area, a favourite walk location for many locals and home to wildlife species for which the brazen dumping poses a safety threat.
Mr Ellis said the fridge was particularly concerning because of the chemicals and gasses it contained, which had clearly not been disposed of correctly.
Nearby a decaying couch slumped where it had been trashed by someone who couldn’t be bothered disposing of it correctly – as did a rotting bed base.

Mr Ellis said the area had been hit before by those who evidently had the means to cart their rubbish into the bushland – but not to an appropriate landfill site.
“It just goes on and on,” he said.
“I know someone who used to really enjoy walking here, but won’t any more because the sight of this was too upsetting for her.
“You don’t want to see signage everywhere but I so think this site needs some sort of sign.”

Parks Victoria area chief ranger, Karen Doyle, said Parks had conducted inspections of Castlemaine Diggings National Heritage Park following reports of dumped rubbish in the area.
“We are working to remove disposed rubbish in a safe and efficient manner,” Ms Doyle said.
“The rubbish includes domestic and household waste, as well as plumbing material.
“As well as being unsightly, dumped rubbish harms the environment and has many impacts including waste contaminating local water supplies, garden clippings spreading invasive weeds and animals and birds being poisoned from eating household waste.”

Mount Alexander Shire councillor Christine Henderson described the practice as a “low act” and said council provision of tip vouchers for the cash-strapped was worth exploring – potentially as part of council’s next waste management review.
“Dumping is a low act. The bush is precious to us all. Show some respect,” Cr Henderson said.

Anyone caught littering, dumping domestic, garden or commercial waste can face significant penalties ranging from on-the-spot fines to court prosecutions.
Infringements range from $330 up to $6608.89. Anyone witnessing rubbish dumping or littering in a park can call Parks Victoria on 13 19 63 or the EPA Litter line on 1300 372 842.