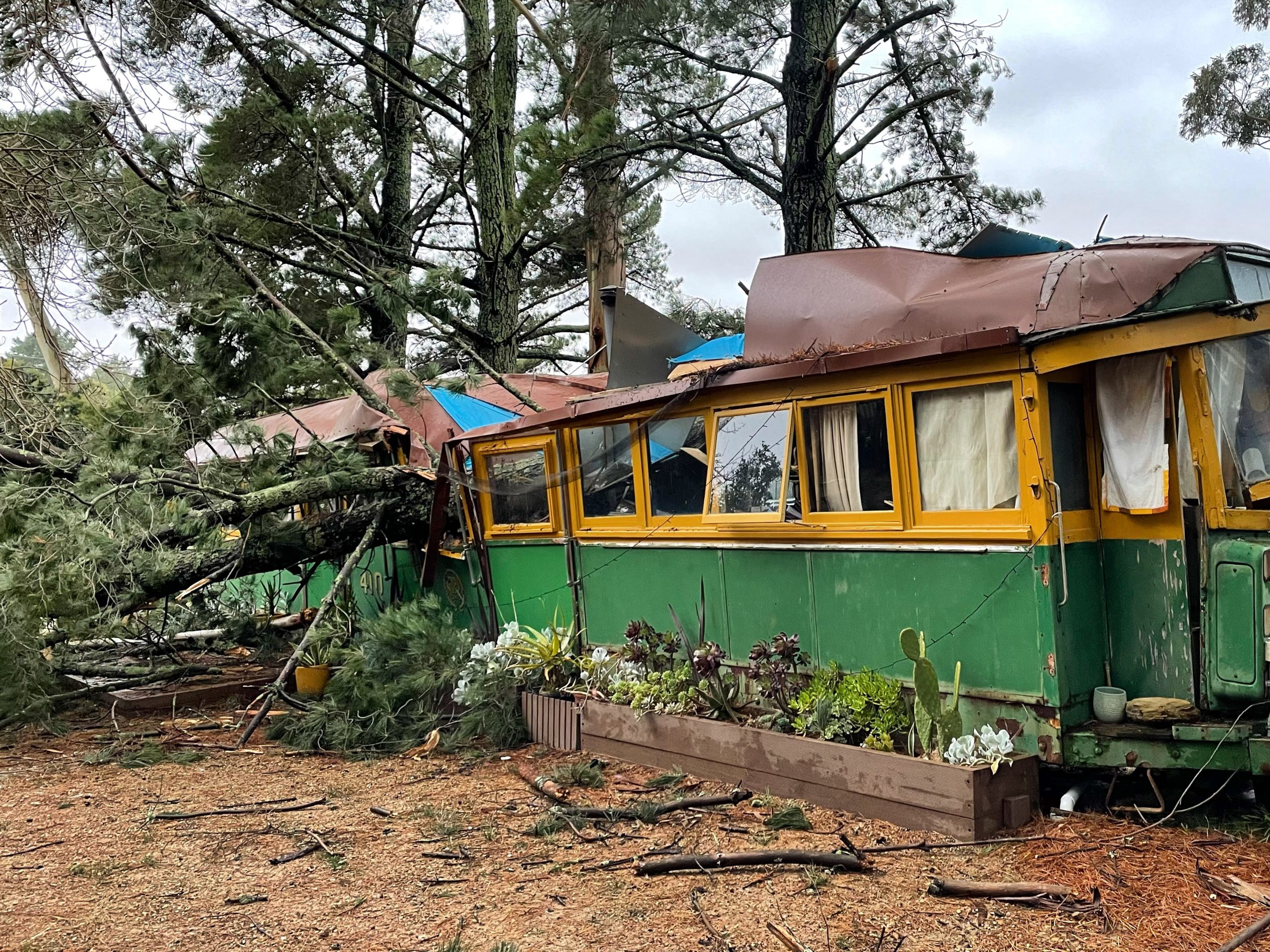 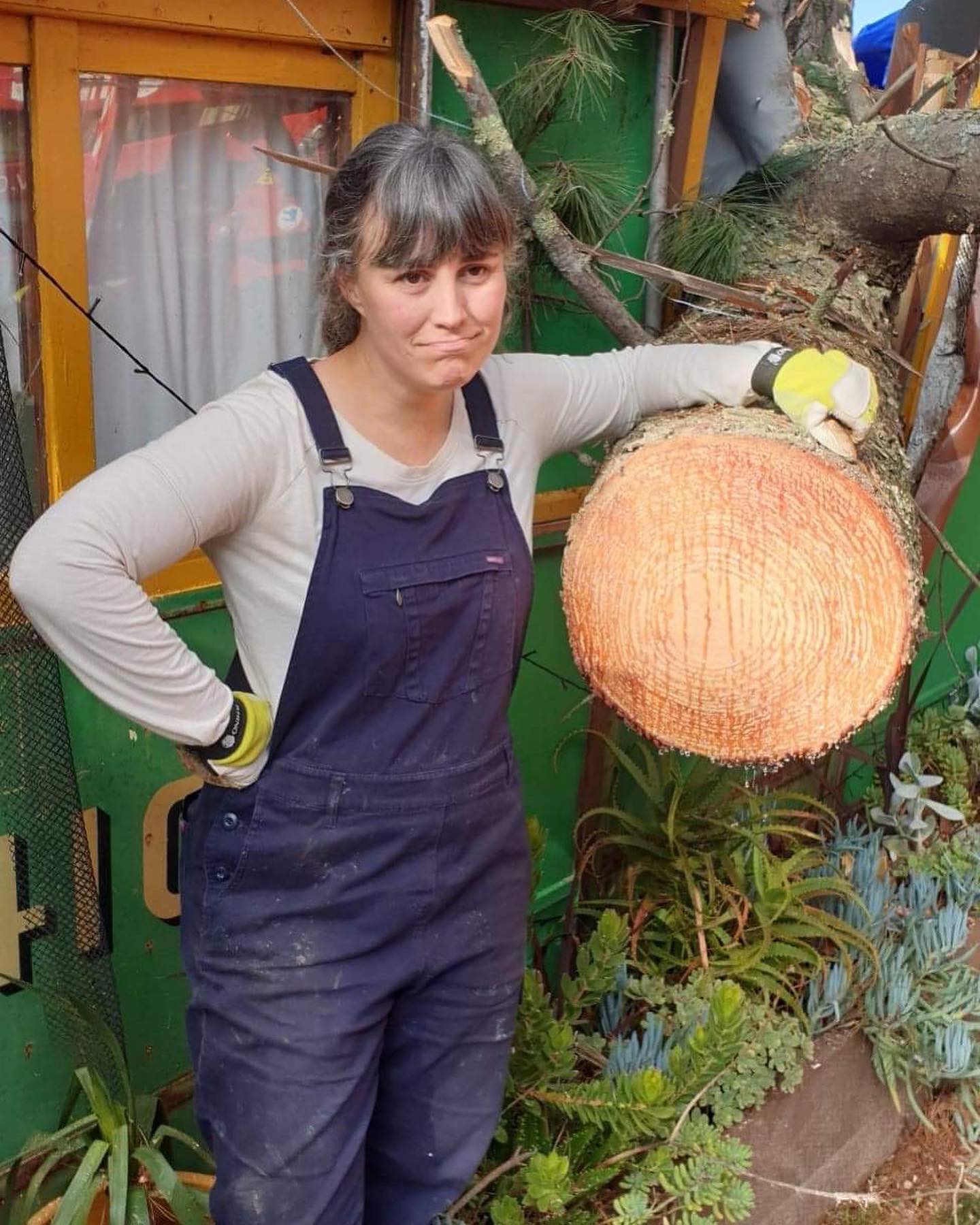 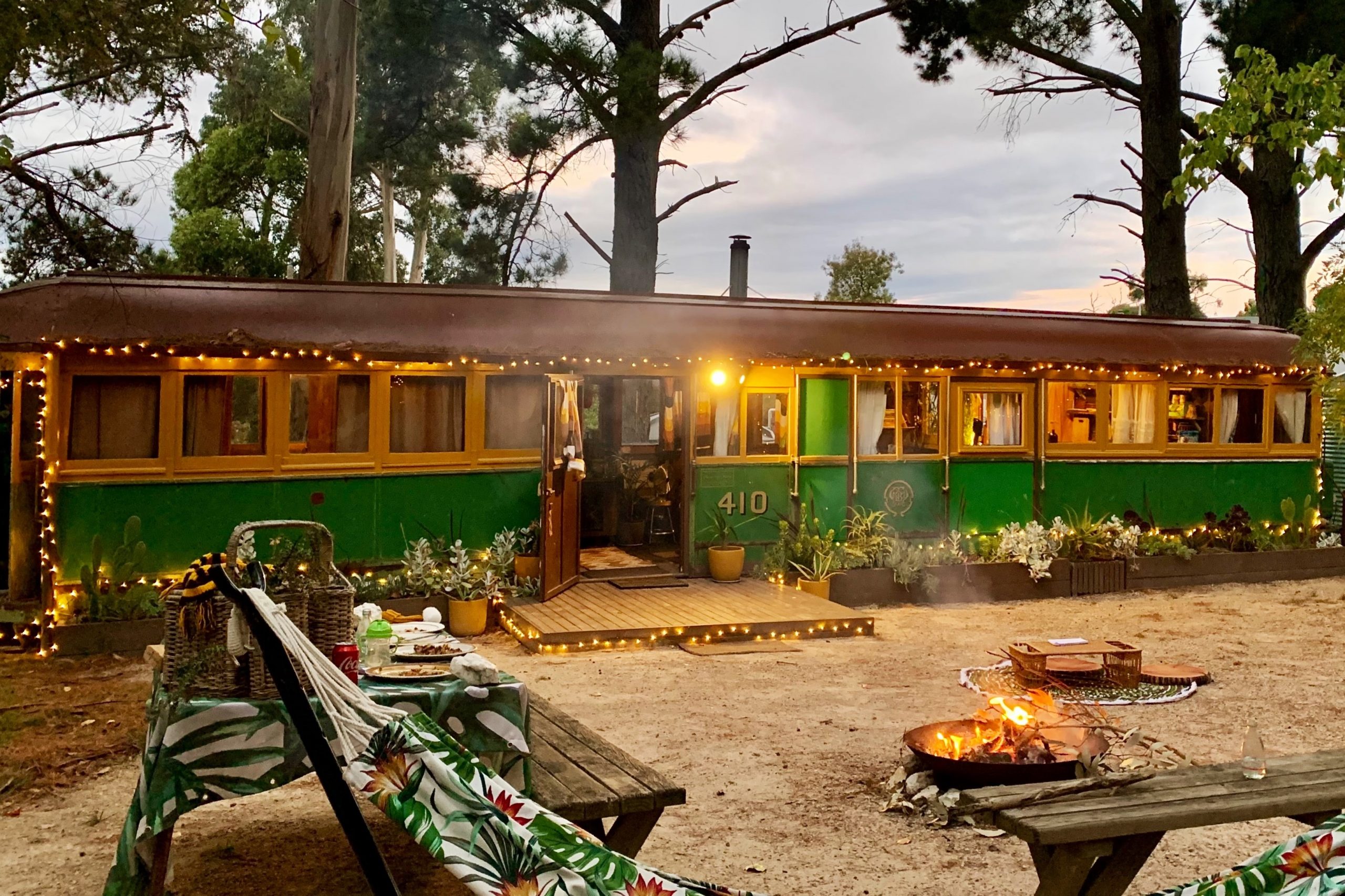 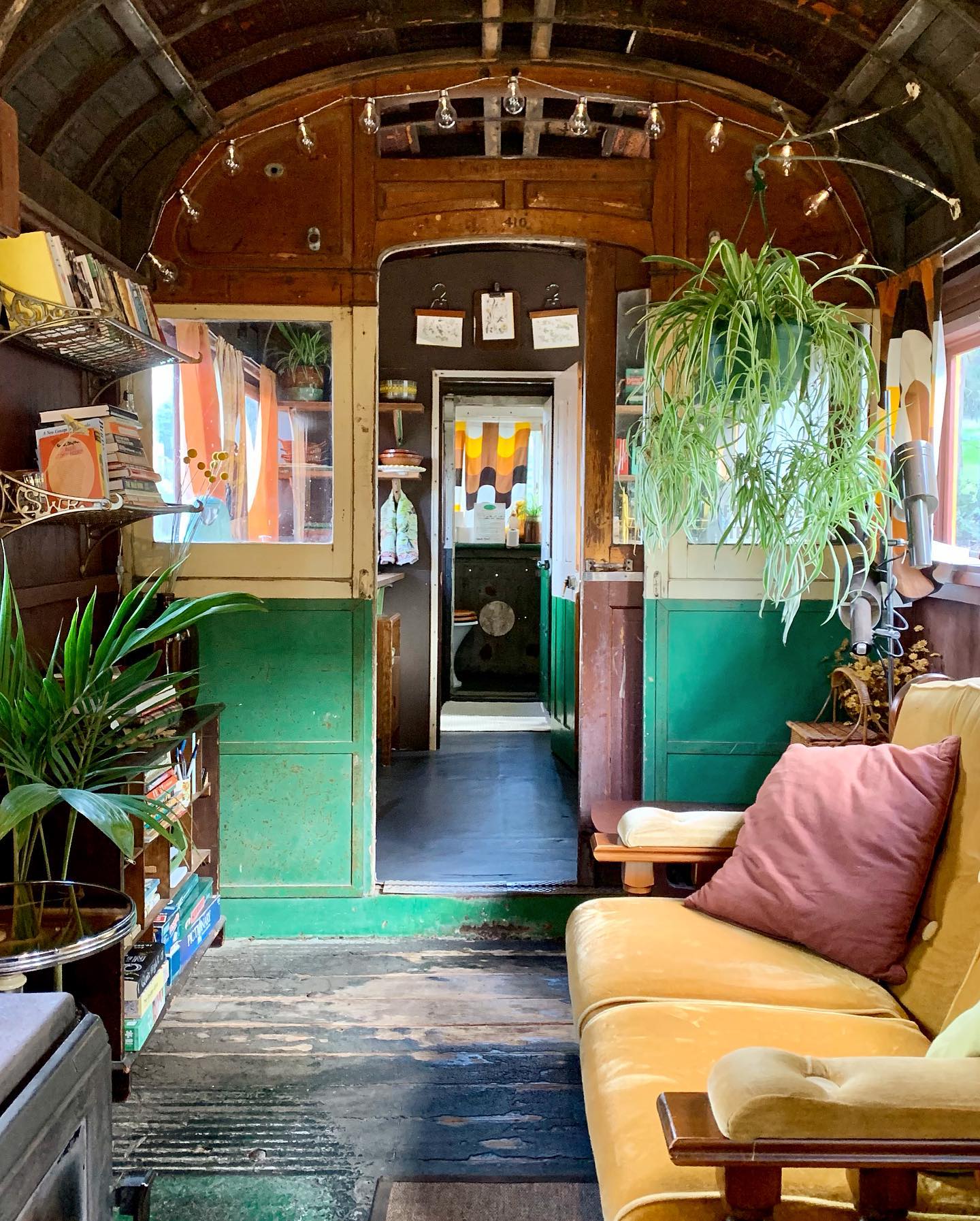 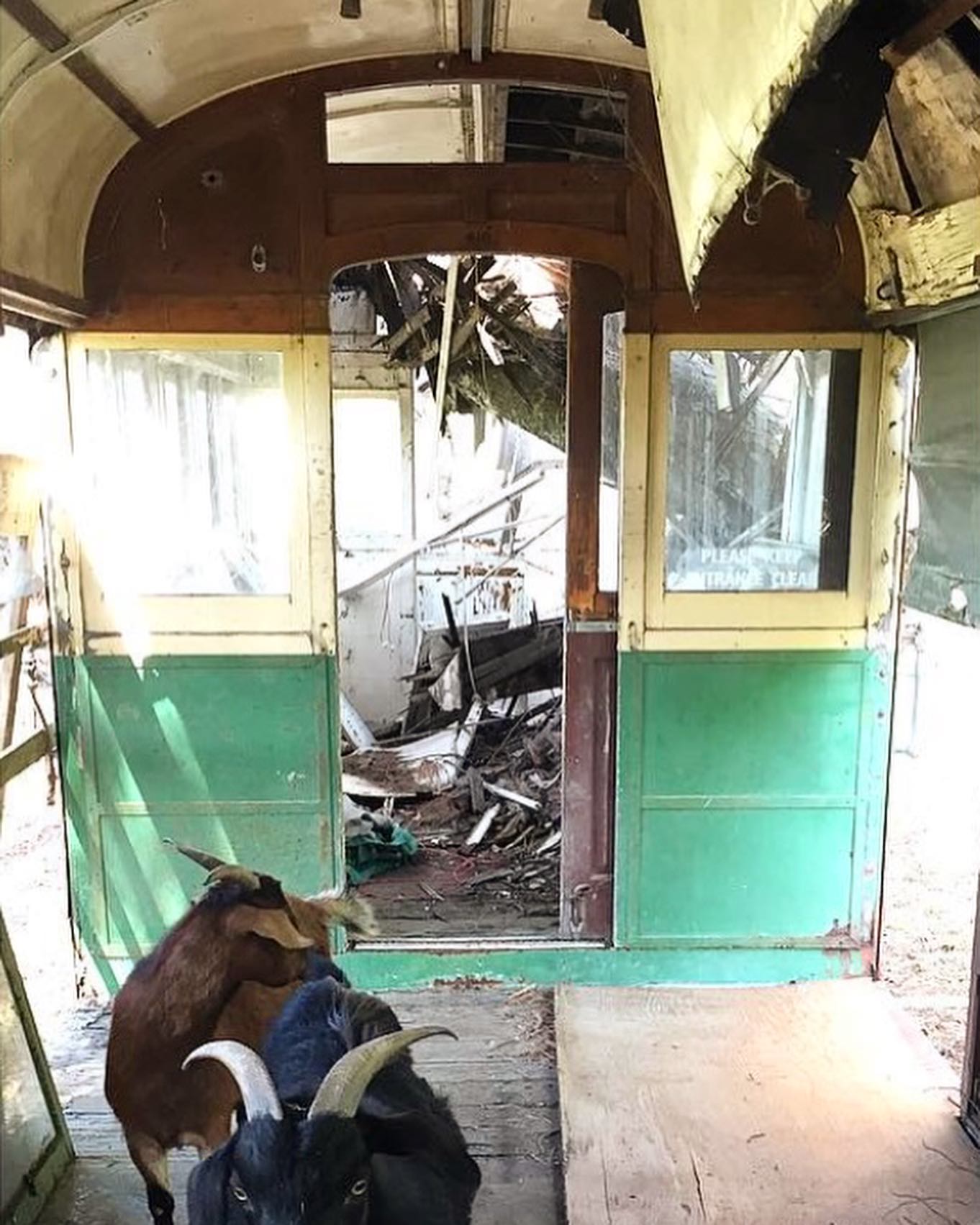 A fundraiser has launched to get one of Lauriston’s most unique stays back on track after it was destroyed in the severe June storms.
The refurbished 1920s W-Class tram was a popular bed and breakfast before a tree crashed through its roof on June 9.
The tram was just a shell with broken windows when Angela Henley purchased the Camp Kulning property in 2014.

After five years of renovations, Angela told the Express she had just got the tram, known as ‘Jean Claude Van Tram’, to a stage she was satisfied with.
“When my partner told me a huge pine had fallen through the tram I thought he was joking,” she said.
“It was hard to process. The tram was in worse condition than it is now when I first saw it. Whenever time and finances allowed I would chip away at it. I had just got it to the point that I felt it was finally finished.”

The tree had completely crushed half of the tram, which housed the lounge room, kitchen, bathroom and toilet. Demolition of the destroyed rooms began last week.
“I didn’t realise the extent of the damage until [Wednesday],” Angela said.
“Half of the tram is going to need to be rebuilt from scratch and the roof recreated. But I wouldn’t know how to walk away from it now. I love that tram so much.”

Before the storm, the converted tram had just made Airbnb’s top 10 Most Wishlisted Unique Airbnbs in Australia. It had received more than 4000 five-star reviews.
Angela expects it will be another four months before she can welcome guests back to the BnB. She hopes to restore the tram’s charm, quirk and relaxing atmosphere.

Storm damage around the property, the tram repairs and the cancellation of existing bookings is estimated to be more than $80,000. The tram was uninsured.
Two of Angela’s friends have launched a GoFundMe page to raise funds for the tram’s unprecedented second restoration. Last Friday, the page had raised $14,670 towards its $30,000 goal.

“I’m really appreciative of all the support we have received. It has been a really overwhelming time for me and my family,” Angela said.
“It’s not just me that loves the tram but so many others who have stayed there and want to return.”

Anyone wishing to make a donation toward the BnB’s restoration can visit the GoFundMe website and search ‘Jean Claude Van Tram’.
Any donations can be used as credit towards a booking once the BnB has reopened. Any donors will go into the draw to win a night in the tram once it’s reopened.