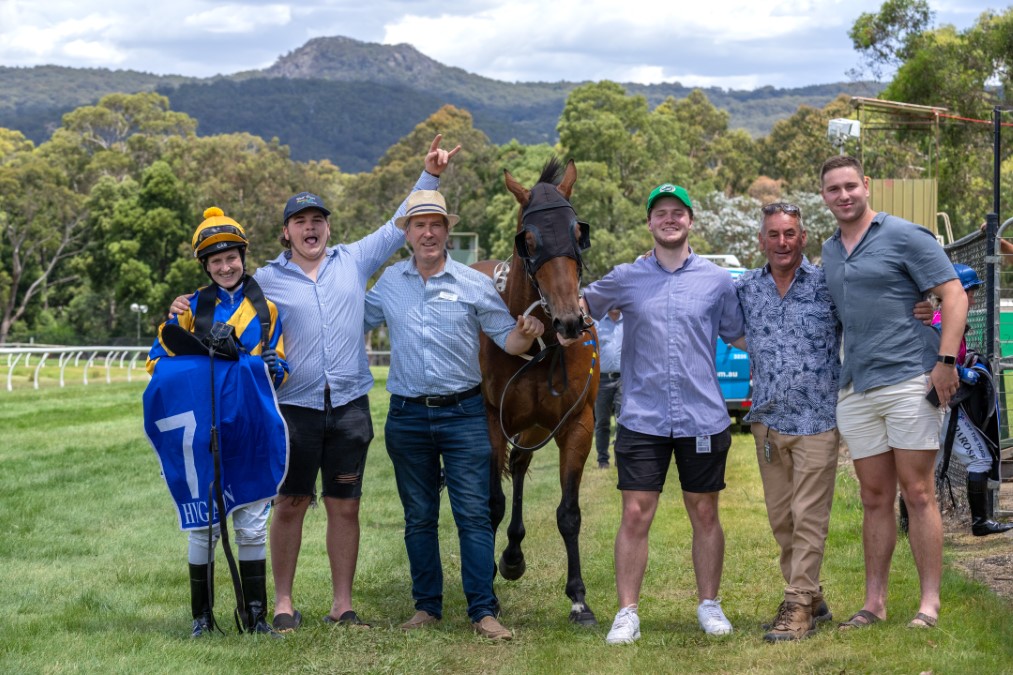 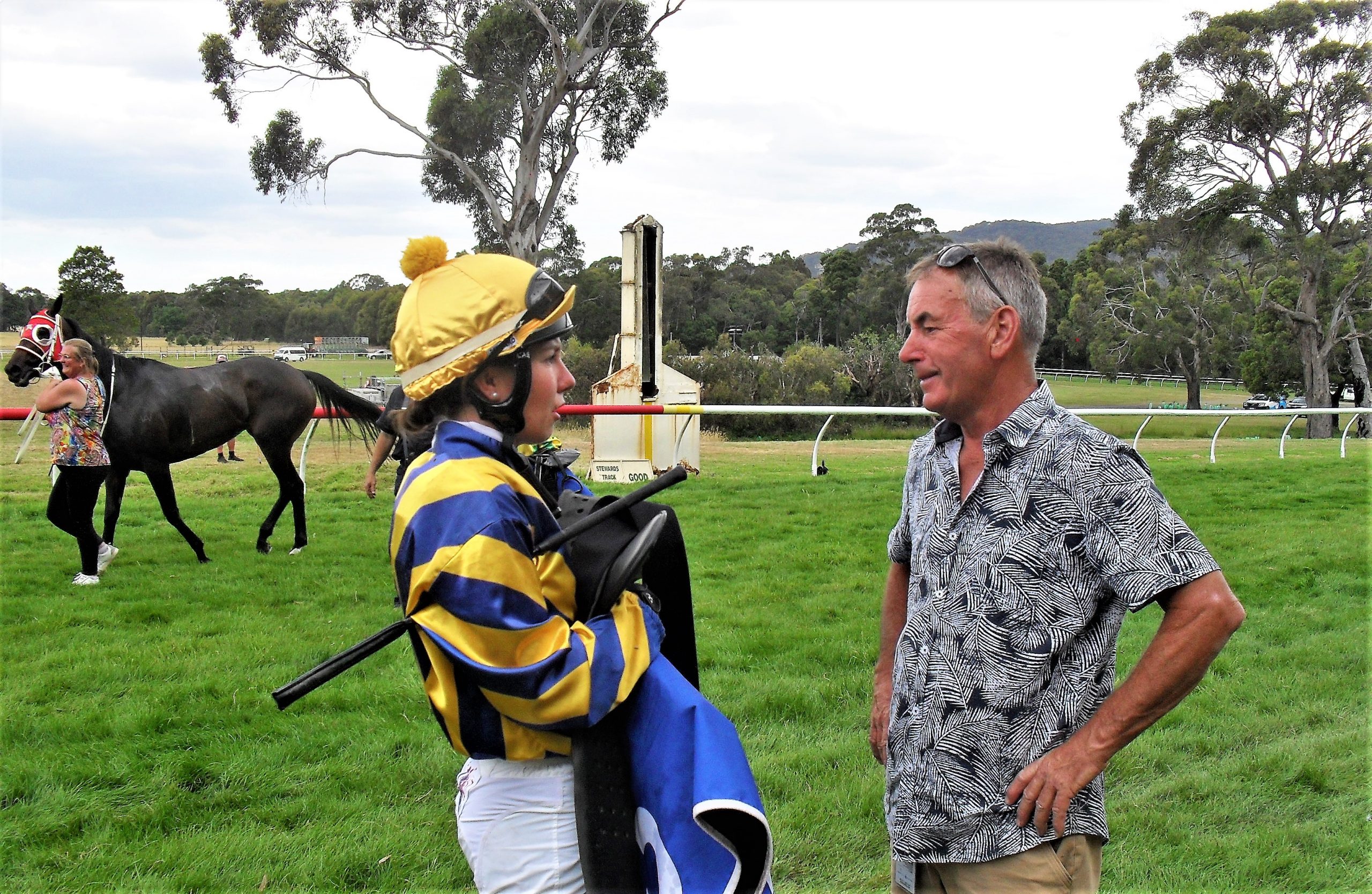 There are countless stories about racing at Hanging Rock going back generations, and New Year’s Day 2022 added yet another chapter, with the next element ahead being the Hanging Rock Cup meeting on Australia Day.

Extreme heat predictions and wavering uncertainty about the latest COVID transmissions in Victoria guaranteed there would not be record numbers in attendance, and everything ran smoothly until a large kangaroo appeared on the track during the running of the sixth and final race, leading to a ‘no race’ outcome.

Kyneton and Hanging Rock Racing Club’s initial estimates put the attendance at about the 2000 mark. Scorching temperature fears not being realised and a welcome breeze, plus an abundance of shade, made the iconic venue much more welcoming than many other locations across the state.

Kelly Sports attractions kept many youngsters occupied away from the racing reserve area.

A locally trained winner came earlier than many expected, in the second race.

Kyneton trainer Neil Dyer knew his last start winner In Bel’s Shadow would probably start favourite in the final event, but there was still some confidence about the prospects of Nicantellya after a close second at Kerang on Boxing Day.

The Kerang run was after a four months’ break, with the six-year-old’s only previous win occurring in Darwin in April, 2019.

The Miranda Park Stan Nicholls Sprint BM58 over 1000m, had all the local content as Nicantellya was bred by Gary O’Meara at his Miranda Park breeding and agistment farm a short distance away from ‘The Rock’.

O’Meara is the K&HRRC vice-president and said Miranda Park was pleased to sponsor the race in memory of lifetime Hesket identity Stan Nicholls, a racing club life member who passed away last April.

Nicholls was described as a true ‘local legend’ for his involvement with racing, the local fire brigade, cricket and bowls.

Nicantellya’s first problem was securing a jockey, with Kevin Bohorun ruled out after being injured in the first race, and Jake Duffy being too heavy. Lancefield area jockey Samantha Noble filled the role superbly.

Jumping well from barrier one, Noble stayed on the rail throughout, taking an inside run in the straight to win by one and a half lengths much to the delight of connections.

It’s not often a third replacement jockey lands the money!

The Midland Express BM52 Handicap over 1800m was won in a tight finish by another outsider in BayFury, an 11-year-old trained by Seymour owner-trainer Ron Hockley.

Experienced jockey Jake Duffy made it three wins from four rides when he hit the front in the last few strides with topweight Purrfect Scent in the bet365 Bruce Jones Memorial BM58 Handicap over 1600m.

Then it was time for race six, the Tony McMahon BM58 Handicap over 2400m.

The ‘lucky last’ at Hanging Rock on Saturday proved to be an anticlimax due to the unscheduled intervention of a large kangaroo.

The scenario changed abruptly in the 2400m Tony McMahon Handicap near the 1000m mark at the back of the course, where trees and undergrowth largely obscure visibility from the main viewing area.

Dyer had favourite In Bel’s Shadow in the five-horse race, and was looking for a double.

Duffy had already ridden a treble, and he made a sharp move on topweight Éclair Rhythm to hit the front …. then the action really occurred with the course broadcaster revealing Éclair Rhythm and then the favourite had been pulled up.

Two horses, Ambusher and Surreal Deal, raced around the home turn and fought out a slogging finish, with the latter getting home narrowly.

The “hold all tickets” call soon went out, and Éclair Rhythm and In Bel’s Shadow arrived back slowly.

A small kangaroo came from the southern area inside the course and hopped past the winning post and headed northwards along the straight.

Many spectators were mystified and connections of the runners soon sought information from the jockeys. Dyer quickly confirmed In Bel’s Shadow had pulled up sound.

Asked what he thought as he headed towards the weigh-in, Duffy declared “It should be a ‘no race’”.

He was later quoted as having heard warning shouts and looked up to see “a big-arsed kangaroo” on the track.

Duffy said he thought he was in a good position to win the race, but had to consider the safety aspect, being unsure whether other kangaroos were likely to appear.

Stewards interviewed the jockeys, and it was no surprise to learn a ‘no race’ had been declared (all bets refunded). The official reason was ‘because of the intrusions of kangaroos on the track’.

Early on Saturday detailed searches were conducted to clear the course of kangaroos, yet despite all the efforts, one at least managed to reappear in the wrong spot at the wrong time.

The incident brought back memories to many of those present of the Australia Day Hanging Rock meeting in 2011 being invaded by numerous kangaroos, and having to be called off without a race being run.

News on the ‘no race’ spread widely, with the Sydney Morning Herald running a commentary headed: ‘Randwick meeting fails to impress as kangaroos rule at Hanging Rock’.

Cricket back on in top five grades

20/01/2022
After being in recess for the past two Saturdays due to increasing COVID implications, Gisborne District Cricket Association’s 2021-2022 season resumes this...

New chapter for Soldier and Scholar

Get to know your grower

In the Hall of Fame