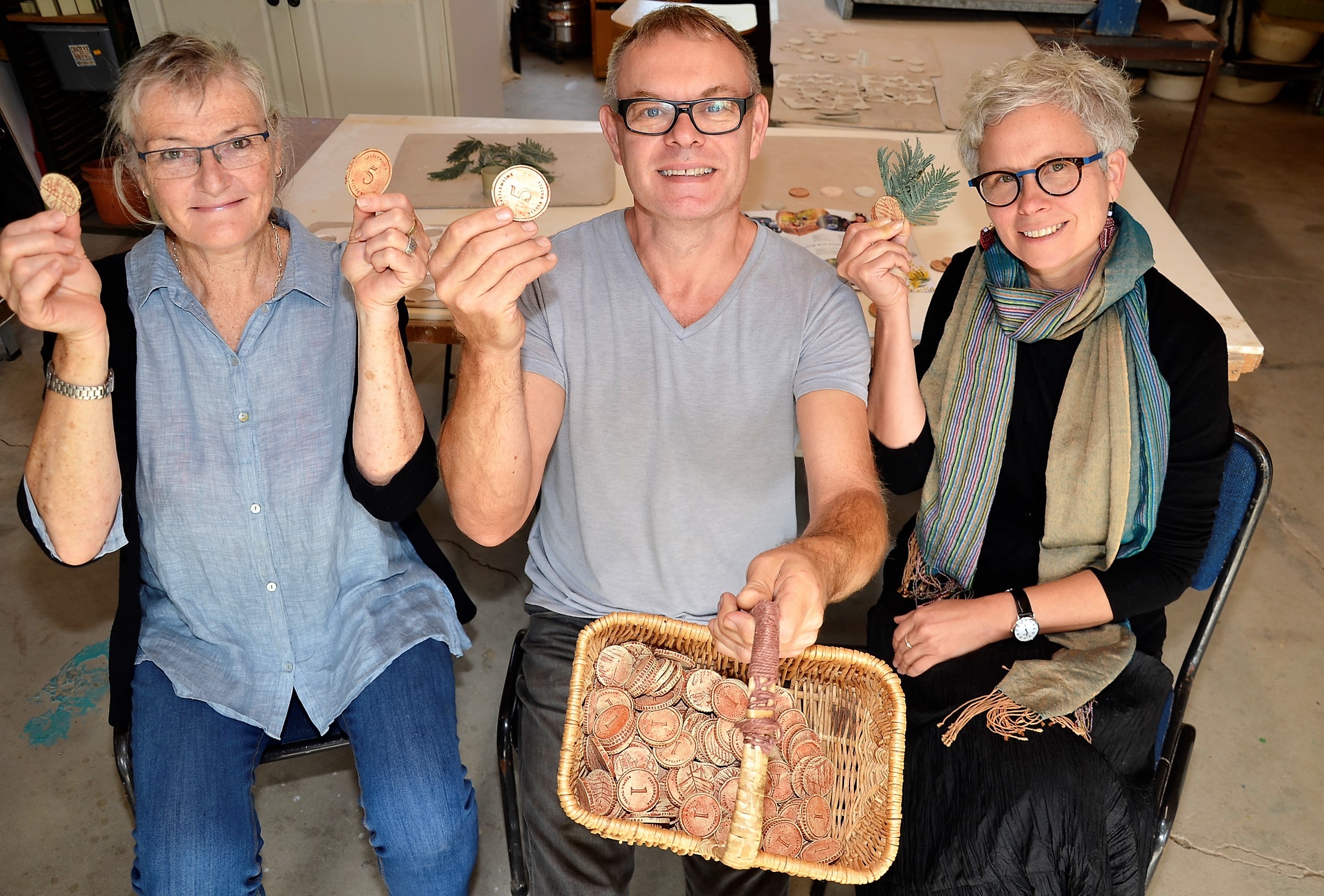 First there was bitcoin and non-fungible tokens ….

But after a while they became sooooo yesteryear and then there was … the silver wattle … a brand new currency about to be released into the Castlemaine economy as part of an innovative arts and economic project.

Somewhat at the opposite end of the monetary spectrum to digital currencies like bitcoin, the town’s very own local currency – the silver wattle clay coin – is aimed at remaining resolutely local and rather than the usual quest to get rich, it has other main motivators behind its “minting”.

With assistance of a Get Lost grant from Mount Alexander Shire, Castlemaine visual artist Dale Cox and ceramic sculptor Ann Ferguson, together with Jodi Newcombe of Carbon Arts and the Castlemaine Institute, have produced the new currency made with local clay into which the impression of silver wattle fronds has been artfully fired.

“By creating our own currency that can only be used in Castlemaine we can build local resilience against national and global economic market forces,” Dale says.

“Once they’re in circulation the coin continues to stay local to build continued wealth within our community.”

Quiet a few local businesses, including the Tap Room, Cabosse and Feve chocolatiers, Tortoise Espresso and Johnny Baker, are among those that will be accepting the clay coins as currency, with the project aimed at supporting local business and seeing local dollars benefit the community.

“And 10 per cent of every transaction goes to Castlemaine Pay The Rent, which is a nationwide program to acknowledge our traditional owners,” Jodi says.

She says all are invited to the silver wattle’s upcoming launch at a special event happening 2-5pm this Saturday May 7 at Castlemaine’s Lot 19 and featuring guest speakers and the opening of a special exhibition on the subject.

The exhibition will run until May 22 with another special event planned for May 12 to feature a guest panel discussing the global phenomenon of such local currencies and their interactions with environmental sustainability and social equity.

“Instead of a sovereign’s profile such as the Queen, an actual impression of the local silver wattle leaf invites a consideration of where we may find true value, and the source of true wealth as the ground beneath our feet and our place within the broader natural world,” Dale says.

“I so believe in this idea of the circular economy,” Ann says.

“Issues of sustainability are of great concern to me.”

Dale says the coins also serve as an artistic provocation to explore our relationship with money and the ways in which we earn, spend and consume it.

“Castlemaine businesses like the Taproom and Johnny Bakers, among others, are joining the project in an economic experiment around concepts of the circular economy,” he says.

About $10,000 worth of the unique clay coins have been fired for release into local circulation and Jodi says they come in two denominations – one worth $10 and the other worth $50.

“They will be available from May 7 at the Visitor Information Centre, the Castlemaine Art Museum and Lot 19, and CAM also plans to keep selling them as collectible artworks into the future,” Jodi says.

And – probably worth noting – the currency’s local creators say that while counterfeiting the coins may be technically possible, the effort it would take to produce such detailed and intricate pieces would way outstrip the value of the coins themselves.

“I think the process is far too drawn out and elaborate for people to even consider,” Dale says.