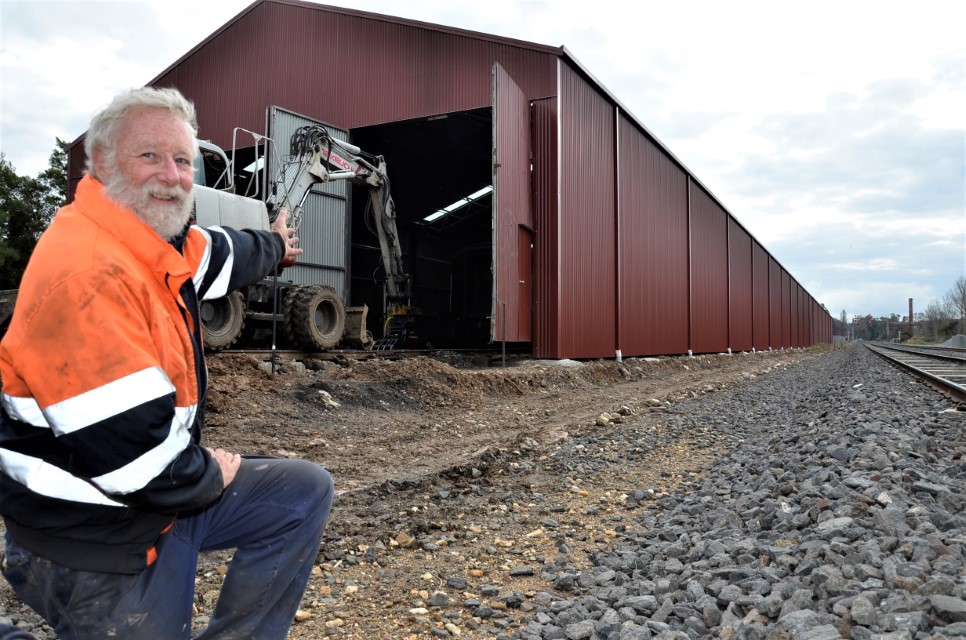 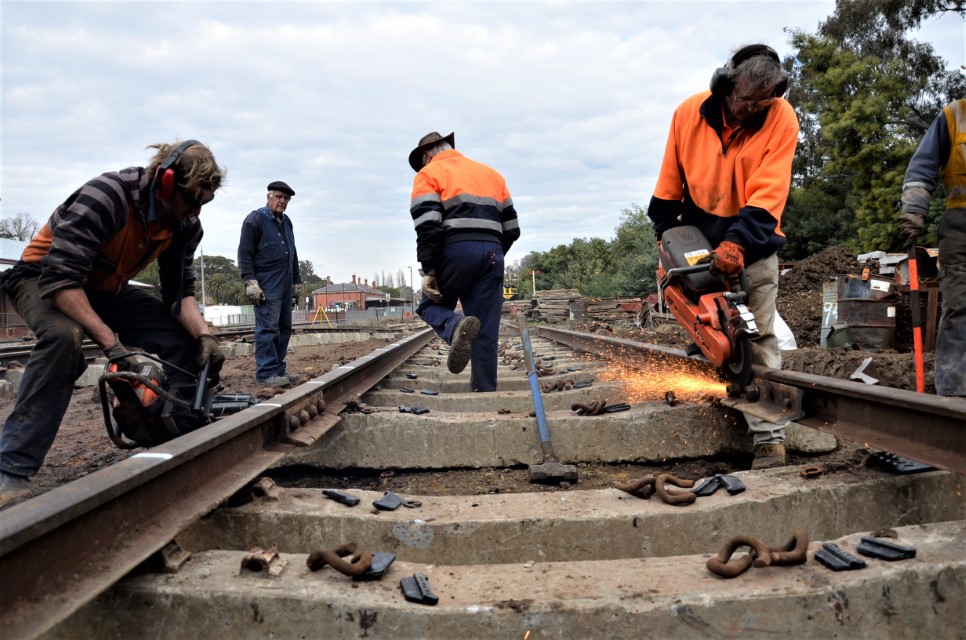 Measuring a whopping 160 metres long by 15.5 metres wide, the freshly completed carriage stabling shed at Castlemaine Heritage Rail Precinct is one of the town’s largest buildings.
“It’s a bl…. big shed,” VGR’s Castlemaine Heritage Rail Precinct caretaker Andrew Reynolds said on site on Friday.
“It’s the biggest open shed in Castlemaine and it’s got to be one of the biggest buildings in Castlemaine.”
Late last week the Victorian Goldfield Railways notched up this major milestone as its civil works team installed track to connect the vast new facility – capable of housing 24 vintage rail carriages – to the region’s Castlemaine-Maldon tourist railway.
The vital link comes as the VGR builds up a full head of steam to resume its vintage train runs on the local tourist line from July 8 after many weeks of COVID-19 imposed hiatus.
Completion of the big vintage carriage stable marks a major step in the tourist railway’s $1.5 million project, revitalising the town’s heritage rail precinct not far to the north of the main V/Line railway station and shifting the VGR’s main base from Maldon to Castlemaine.
On Friday the lighting was also switched on in the new carriage stable with local electricians busy working to finalise electricity connections for the new facility.
“It means our entire carriage fleet can be under cover, which makes the job of restoration and maintenance so much easier,” Mr Reynolds said.
The project also includes completion of a new locomotive stabling shed.
“The project works are coming in within time and budget, although there will be some more infrastructure works that needs to be done, but we have enough infrastructure to start running our heritage steam engine and heritage carriages when we re-open on July 8,” Mr Reynolds said.
And there’s also a potentially colourful added aspect with the VGR exploring options to make the eastern facing exterior wall of the new carriage stable available for public art.
Mr Reynolds said talks with Mount Alexander Shire Council executive about furthering this possibility had been well received.
“We’re thinking something depicting the history of Castlemaine, with a nod to our rail history, would be ideal,” he said, likening the prospect to the famed Wimmera Mallee Silo Art Trail.
“While it isn’t a silo, it’s the most wonderful canvas and it could become a huge drawcard in its own right.
“We’d like to see if it can get legs. We can’t finance it but we can provide the ‘canvas’.”