Local firies are fighting to halt the shock sale of the Romsey Group Headquarters.
Group officer Ralph Hermann said the bombshell news had left brigade members baffled as the decision appeared to be made in Melbourne CFA headquarters without proper consultation at a local level.
The old courthouse at Stawell Street has served the brigade for decades and an extension was built in 2003 through a significant contribution from Macedon Shire Council’s Ash Wednesday Fund.
Mr Hermann said one of the biggest blows in the sale was the knowledge that the funds would not be returned.
“The CFA owns the current site but any sale proceeds goes into treasury funds. The CFA and the community are the losers here,” he said.
“It is the opinion of the group that the sale of this property is shortsighted and a blatant misuse of community funds.”
Several community groups that had found a home at the old courthouse will also be impacted by its sale including Lancefield Romsey Lions Club, a local art group and Red Cross.
Following the sale, Romsey Group Headquarters is expected to share space at the newer Romsey Fire Brigade Station, a few doors down, but is a notion members deem “impractical”.
Members say the move will reduce space for both parties and eliminate all external storage and shedding for equipment and workshop space which the brigade has been relying on at the group headquarters site.
In Parliament recently, Shadow Assistant Minister for Environment, Communities and Volunteers Cindy McLeish said the move was “disrespect shown to volunteers”.
“The government is going to…force volunteers back into the poor working conditions they were in before, conditions that no business or government department would force upon its staff,” she said.
Last week, the Romsey Group raised its concerns with local councillors and Macedon MP Mary-Anne Thomas.
Ms Thomas said the state government valued the incredible work CFA volunteers did in protecting Romsey and the surrounding area.
“We understand the need for Romsey Fire Brigade to continue to be at the heart of the community, and CFA will work with Romsey Group to ensure that they and other community groups continue to be accommodated,” Ms Thomas said.
She said the government’s $10 million Enhancing Volunteerism Grants program was available for brigades who required funding for facilities or other requirements to ensure brigades could continue to support and protect their communities.

Clarification: The reference to ‘treasury’ made in the following story was intended to indicate the state-wide financial reserves of the CFA rather than State Treasury. 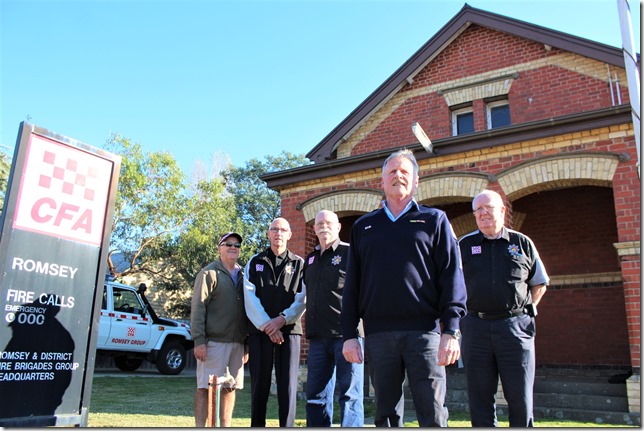