In a pulsating contest at Gilbert Gordon Reserve, a new-look Woodend-Hesket overhauled a gallant Macedon to win by five points on Saturday.
The hard-fought match of the round victory effectively revives the Hawks’ season, with the win being their first against Macedon in 12 years.
Such was the elation when the siren sounded, and in the changerooms afterwards, one could be excused for thinking it was an elimination final victory for the home side.
The 12.6 (78) to 11.7 (73) victory was hard earned, and both sides squandered chances, often under pressure.
Injuries took their toll on both sides. Some players carrying injuries stayed on the field in the heat of battle when the match was in the balance in the last quarter.
Macedon’s big ruckman Rowan Andrews (suspected broken cheekbone from ‘friendly fire’) and fearless Mitch Blake (concussion in a head clash) were hurt in the first half and conveyed to hospital in the first half. Hawks’ speedster Liam Bianco took no further part in the game after being stunned in the collision with Blake.
Hawk utility Josh Pound kicked two goals but carried a hip flexor injury for most of the match, and ruckman Marcus Stapleton appreciated the loss of Andrews to influence the game.
In perspective, Woodend-Hesket threw off the memory of the thrashing inflicted by an on-fire Romsey on April 24, and can confidently look forward to easier matches against Western Rams and Lancefield in the next two rounds.
Two 50m penalties that led to goals for the home side came at crucial times when Macedon threatened to establish a winning lead.
Ace forward Jason Cooke, often a match winner, always looked dangerous.
Hawks’ coach Ben Tankard did not underestimate the quality the unbeaten club he formerly coached would bring to the field, and when the Cats led by 20 points in the third term it was crunch time. A loss would leave the Hawks distanced from the top five.
James Vistini was the proven quality recruit who really stood up when it mattered in the second half. Some of his play was breathtaking, and he earned the best afield medal.
Three goals in quick succession by the Hawks late in the third term set the stage for an exciting finish. Big Tom Gawthorp kicked two, one after the siren.
Nine points up, Macedon needed to score goals and tired players tried to perform heroics as play ebbed and flowed and spectators became entranced.
Vistini and Ethan Gove weaved their way through traffic and kicked the only two goals for the quarter.
The last few minutes seemed to be an eternity with less than a goal the difference. Desperation was paramount.
Macedon’s great record in tight finishes was dented when the siren sounded, in what will surely rate as one of the top matches of the season.
‘NO EXCUSES’
Macedon coach Al Meldrum was philosophical after the match.
“No excuses … I thought we got what we deserved. We were very undisciplined at times,” Meldrum said.
He felt the Hawks had been more active at stoppages and Macedon would reflect on the match
Tankard said the Hawks had taken fantastic steps forward, despite making things hard for themselves at times.
“It turned into a battle of attrition, and I think the even contribution we made across the field was the difference,” he said.
“We should be four and two after the next two rounds, and on our journey.” (towards a finals berth).
Hawks’ versatile captain Alistair Rae had a strong influence on the game and is looking forward to matches ahead.
The RDFNL is probably pleased with the outcome, guaranteeing more competitive matches with a finals spots at stake as the season progresses.
OTHER MATCHES
The other three games on Saturday failed to produce surprises.
Lancefield could be pleased with its first half at least against Diggers Rest, with class prevailing.
Riddell’s speedy and elusive sharpshooter Jarrod Vernon (ex-Gisborne) had a field day with 10 goals as the Bombers kept the hapless Western Rams scoreless to win by 151 points.
The Bombers are now on top of the ladder, with supporters smiling.
Wallan rebounded from a narrow defeat at Macedon to outclass Melton Centrals. 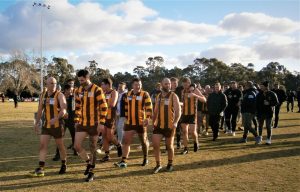