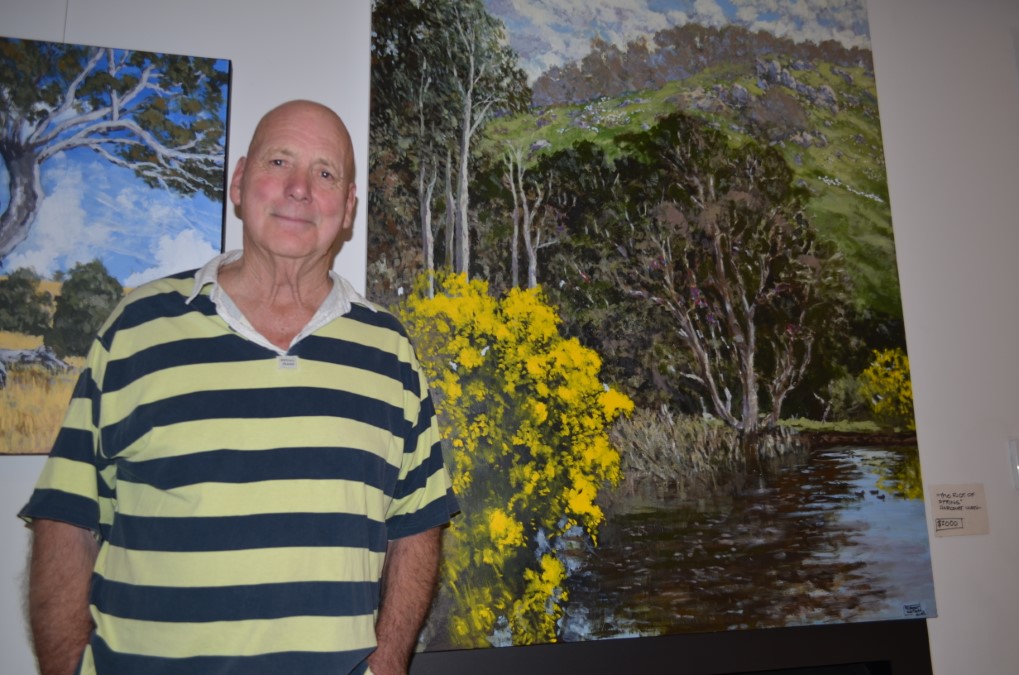 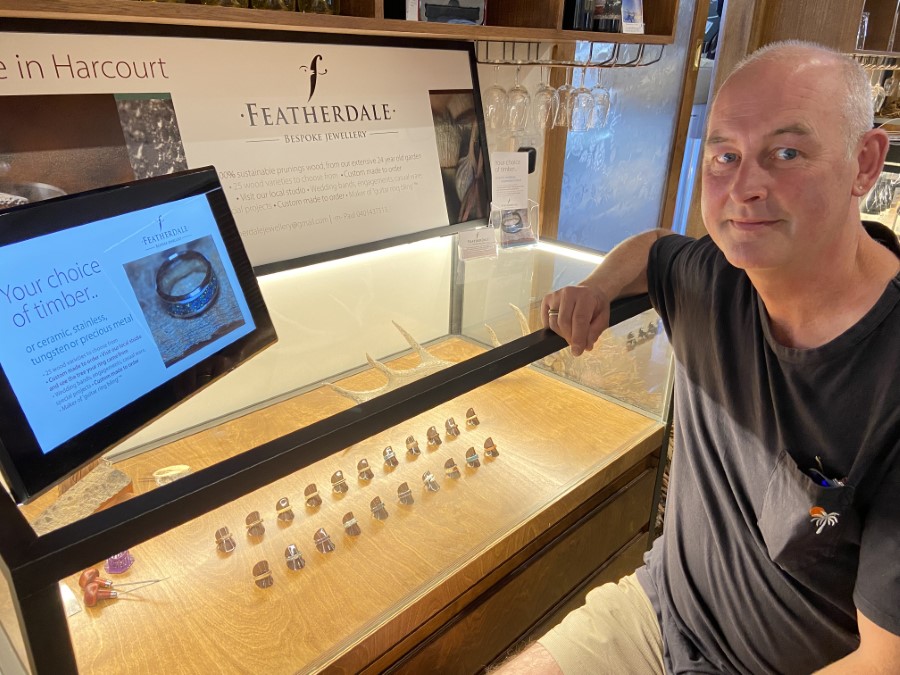 A new series of works by award-winning Harcourt North oil and acrylic landscape artist Robert Watson has recently been unveiled at the gallery at Harcourt Produce and General Store.

The work is complemented by a new permanent installation of handmade jewellery by Paul Morris of ‘Featherdale Bespoke Jewellery’ crafted from native and exotic timbers from his Harcourt North property.

Interestingly the pair have both come from draftsman, illustration and design backgrounds and since settling in Harcourt each have found more time to focus on their passion for art.

Robert said many of his latest paintings in this new exhibition Spring and Summer included vistas of the land around his Harcourt North home as well as works created during time spent on the Murray River.

“I discovered a flair for drawing at a young age and later put this to use as a black and white artist in Sydney before doing mapping for an American exploration company,” he said.

“In 1965 I was called up to do national service and was based at Fortuna Villa in Bendigo at the Army Survey Regiment doing mapping.

“I was able to enjoy a 12-month break from the Defence Force in 1991 where I lived on the Murray River and these latest works are inspired by that time.”

In later years Watson did line drawing illustrations for real estate agents before the introduction of digital photography technology.

The artist said he was delighted with the response to his latest work, with one piece selling while he was still in the process of hanging the exhibition.

Paul Morris also discovered a flair for illustration as a youngster and dabbled in jewellery making. He studied design and illustration at Swinburne. He worked as a draftsman and illustrator and will be known to many from his time at Dromkeen Homestead at Riddells Creek.

“The pandemic forced me to slow down and re-evaluate my priorities and I decided to focus on my passion for jewellery,” he said.

His beautiful handcrafted rings are created from sustainable timber prunings from 40 different species of trees in his garden and incorporate ceramic, stainless, tungsten or precious metal elements. In fact, you can select the materials to make your custom piece.

Harcourt Produce and General Store operator Annette Larsen said she was proud to provide a space to celebrate and showcase the talented local artists, producers and makers of the Harcourt Valley region.

Harcourt Produce and General Store is open seven days from 9am to 3pm.

The cafe features a range of local pastries and fare made from fresh ingredients from the store’s garden and a wide array of products and preserves produced throughout the Harcourt Valley and beyond.

Call in on your next visit to Harcourt or during the upcoming Applefest and Arts Open events and check out the works of these two talented locals. Watson’s exhibition will run until the end of March.